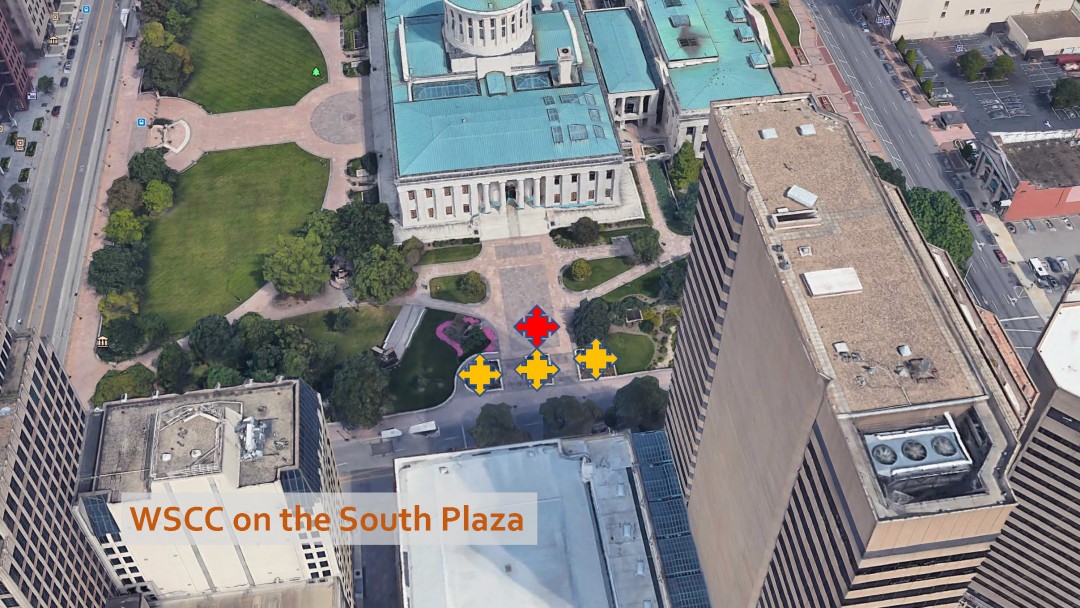 Project Summary: The Ohio Women Suffrage Centennial Commission (WSCC), Secretary of State’s Office, and Ohio Arts Council invite Ohio artists (and those with ties to Ohio) to submit images of past work for consideration for a new commissioned memorial to be located on the grounds of the Ohio Statehouse in Columbus, Ohio. From the submissions, a group of semi-finalists will be selected to submit proposals for the Women’s Suffrage Memorial.

The project will be funded with private dollars. The Selection Committee comprised of WSCC members and state agency staff will review submitted artist images and resumes.

Project Background:
The WSCC was created by the 133rd General Assembly through Senate Bill 30 for the purpose of commemorating women’s right to vote as achieved through the ratification the Nineteenth Amendment to the United States Constitution in 1920. One key goal of the WSCC is to honor the women’s suffrage movement by erecting a monument on the prestigious grounds of the Ohio Statehouse in downtown Columbus.

Nationally, less than 8% of all public figurative monuments in the United States today feature women, and the exterior grounds of the Ohio Statehouse do not feature any monument or memorial acknowledging the many advances made by Ohio women in the state’s history.

Artistic Goals of the Commissioned Piece:
The artist is asked to consider a design that represents a permanent monument to represent the unrelenting strength and determination of women who worked for the passage of the Nineteenth Amendment. The design should also represent the women of yesterday who were active in the suffrage movement, the women of today, and the women of tomorrow as they continue to work towards better opportunities for education and employment as autonomous individuals who deserve enfranchisement and expression of their own political identities.The memorial itself must help the public, legislators, and visitors to the Ohio Statehouse understand the history of the women's suffrage movement, and that even still today, we continue to work towards equality for all people.

The Origin of the Ohio Capital and Statehouse:
In 1812 the state legislature chose Columbus as the site for the new state capital of Ohio, a title previously held by both Chillicothe and Zanesville. A ten-acre plot of land east of the Scioto River was donated for the construction of a new statehouse by four investors from Franklinton: John Kerr, Lyne Starling, John Johnston, and Alexander McLaughlin. After funds to build a statehouse were authorized on January 26, 1838, a three-member commission was selected to oversee the design and construction. A national design competition was advertised in Ohio, New York City, Philadelphia, and Washington, D.C., and three designs were selected out of the sixty submitted. Henry Walter of Cincinnati submitted the winning design, but ultimately the three designs were merged into a single composite design that became the basis for initiating construction.

Statehouse Renovations:
The Statehouse underwent a comprehensive restoration project that began in 1988 to restore the historic appearance and character of the building. This project also involved updating the building for modern engineering systems and providing new spaces for a growing population. An addition designed by Schooley Caldwell Associates was also added as a connector between the Statehouse and the restored and re-named Senate Building. The Statehouse restoration project lasted until 1996.

Practical Considerations:
Artwork considered for installation must be durable and suitably maintenance free. Exposure to weathering, potential for damage, and public safety must influence the selection of materials, structure, location, and method of installation. The use of utilities or mechanical apparatus as a part of or in support of the sculpture is discouraged. Additional information provided by the State Architect, including images, can be found here: https://www.dropbox.com/s/v07qtkma5l4hcle/WSCC%20at%20the%20Ohio%20Statehouse.pdf?dl=0

Selection Review Process:
Interested artists should complete the online form by visiting: https://ohiowsccartworkcommission.artcall.org
In addition to the eight (8) images uploaded, artists are requested to submit the following documents:
1.           a current resume (maximum four pages) & artist statement as one pdf
2.           an image list in the order the images are uploaded

The Advisory Selection Committee will review submitted materials and will develop a list of semi-finalist artists. These semi-finalists will be invited for a site visit. More detailed information about the Ohio Statehouse and the site will be made available during the site visit. For artists interested in developing a site-specific proposal for artwork. Each semi-finalist will be offered a proposal fee in addition to an honorarium for their site visit. Artists’ proposals will be judged competitively by the WSCC in consultation with the Secretary of State. The Capitol Square Review and Advisory Board will make all final decisions as they are the only body with such authority.

Submitted proposals become the property of WSCC and the Capitol Square Review and Advisory Board. For artists interested in offering existing sculptures for purchase, please indicate your selling price when submitting your images. No proposal fee will be offered for existing work.

You can leave this video on your call site's homepage (or embed it on any page) for a quick tutorial your users can watch to help them with the submission process.